Join us for a viewing of the documentary – Painted Land -In Search of the Group of Seven and lunch prepared by LOLA’s very own Lynn Richie! The past meets present in a film energized by breathtaking cinematography and an uplifting musical score.  Historian Michael Burtch, and the writer and photographer team of Gary and Joanie McGuffin, achieve their personal quest to ‘walk in the Group of Seven’s footsteps’, in tracking down the precise locations of the groups famous paintings.  These paintings have come to symbolize what is a distinct Canadian identity.

The Group of Seven, also known as the Algonquin School, was a school of landscape painters founded in 1920 as an organization of self-proclaimed modern artists.  Their depictions of Canada’s rugged wind-swept forest panoramas were eventually equated with a romanticized notion of Canadian strength and independence. Their works were noted for their bright colors, tactile paint handling, and simple yet dynamic forms. In addition to Tom Thomson, David Milne and Emily Carr, the Group of Seven were the most important Canadian artists of the early 20th century. 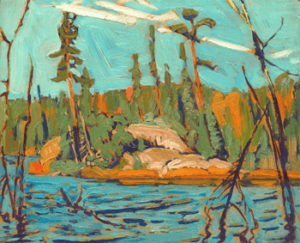 Lynn Richie, LOLA’s own Executive Chef, will prepare a light lunch for visitors to enjoy prior to the documentary.  A short discussion will follow the film.